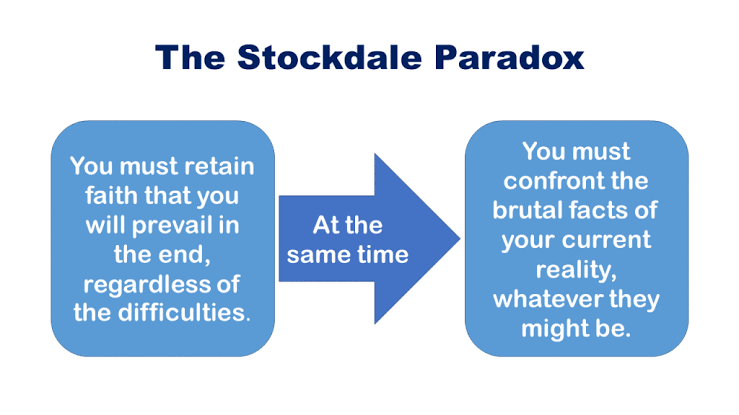 Stockdale Paradox in times of Pandemic

Stockdale Paradox was named after James Stockdale who was former US Vice presidential candidate and Vietnam prisoner of war. He was one of the highest ranking Naval officers at that time. For 7 years Stockdale was put to terrific torture and had no reason to believe he would make it out alive. In this grim situation he found a way to stay alive by embracing his harsh reality and balance it with healthy optimism.

In these Covid times we all go through this Stockdale Paradox as we know that the reality is grim but our hope for a better future drives and motivates us to keep doing what we could do with limited resources and avenues.

Actually this could be applied for any situation in life Personal or Professional. As long as we know our strengths & weaknesses and feel accomplished in putting the right efforts within the set limitations we must learn to accept the outcome, come what may! It might be a tough phase in your life or career but being positive and optimistic with balance of realism becomes the motivation and brings in the conviction in doing something right.

In simple terms it’s the idea of hoping for the best, but acknowledging and preparing for the worst! The Stockdale Paradox can help you assess a current situation and plan accordingly to tackle the challenges we come across. It reiterates the idea that you can be positive and develop belief that you will overcome all difficulties while at the same time be prepared to confront most brutal facts of your current situation.

Stockdale Paradox story reminds us that most of the captives who died were the ones who were extremely optimistic of making it to the outside world and died of broken hearts. James Stockdale however did come out because of Paradoxical counter thoughts that he accepted in his mind and did not expect a miracle to change everything overnight. Miracles do happen but it takes time and effort and what we call destiny!

Our country’s ancient history and teachings from Bhagavad Gita clearly drives this point!

“कर्मण्येवाधिकारस्ते मा फलेषु कदाचन ।“  “Karmanye Vadhikaraste, Ma phaleshou kada chana” – you have a right to perform your prescribed duty, but you are not entitled to the fruits of actions.

So keep doing the right things with a positive mind-set without attaching too much importance to the outcome, rather be ready to accept the outcome and gain wisdom from this great journey called life!